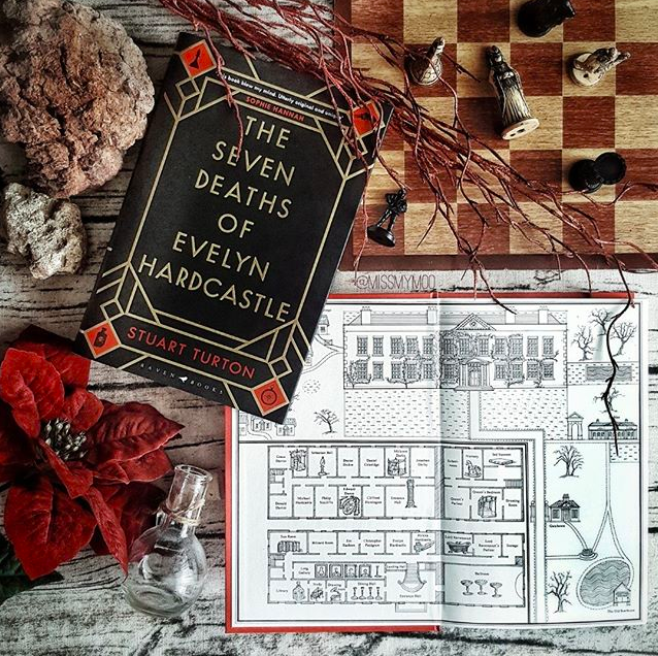 The Seven (and a Half) Deaths of Evelyn Hardcastle is written as part cautionary tale and part whodunit. Upon reflection, I think the book was organized purposefully: confusing and a bit dense at the beginning, it’s hard for the reader to get a grasp on the story, much like it is hard for the first main character to get a grip on his bizarre new circumstance. While I believe this was intentional it makes little difference to the ease of reading when you first pick up the book. I felt really bogged down in character introductions and names at the beginning, when I was expecting a typically period murder mystery.

Typical period murder mystery this book is not. While the end wrapped up nicely and the mystery is solved, there were too many issues that snagged, making it impossible for me to thoroughly enjoy the book. First, nearly every single character is a man. When someone gets to inhabit 7 different characters throughout the course of a book, you’d think one of them might not be a white man, but alas. Second, the ending bludgeons the reader over the head with the moral lesson: live every day like it’s your last.

I definitely didn’t hate the book, it was a creative and unique twist for a murder mystery. I’m impressed by how little was wasted in explanations of this alternate universe, which would have detracted even more from the story. Overall, however, The Seven (and a Half) Deaths of Evelyn Hardcastle was somewhat lackluster.

I recommend the book to those who read a lot, aren’t daunted by complicated story lines, and those who like a mystery. I listened to the book on Libby, which I think helped distinguish the characters, and I’d recommend reading it that way.