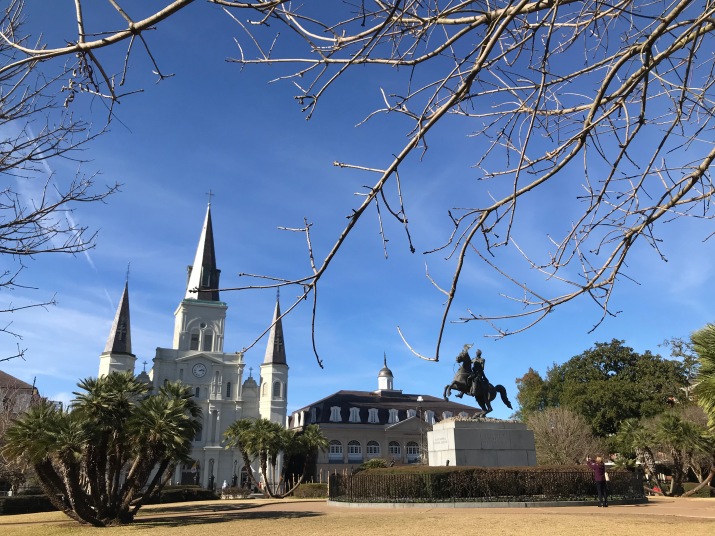 At 300 years old this year, New Orleans, Louisiana is one of the most enticing cities in America. “The most Northern city in the Caribbean,” NOLA boasts a Euro-Caribbean flavor steeped in blood, ghosts, and rolling good times. She’s rough-and-tumble but generous, hip but not aloof, she’s Southern but not a Lady.  In this city, history compounds history: on the backs of slaves, world-wide trade was built, making the city rich in money and culture. A former French penal colony, New Orleans wears the mantel of ‘Underbelly’ proudly, even in the most touristy areas. Congo Square is one of the only places in The South where African slaves were permitted to congregate and celebrate their cultures. A few blocks away, Louis Armstrong was born, and with him, Jazz. French Canadian exiles found refuge in alligator-filled swamps; they became the Cajuns. Between Bourbon Street and the Mississippi, the Sazerac was invented. Voodoo, a prominent and respectable religion in New Orleans, gets tangled up in tales of ghosts and vampires. All of this at seven feet above sea level!

It would be foolhardy to try to define all the different threads of history that forged New Orleans into what she is today. Rather, here’s some of what I experienced and observed in four short days in January spent in the Big Easy. 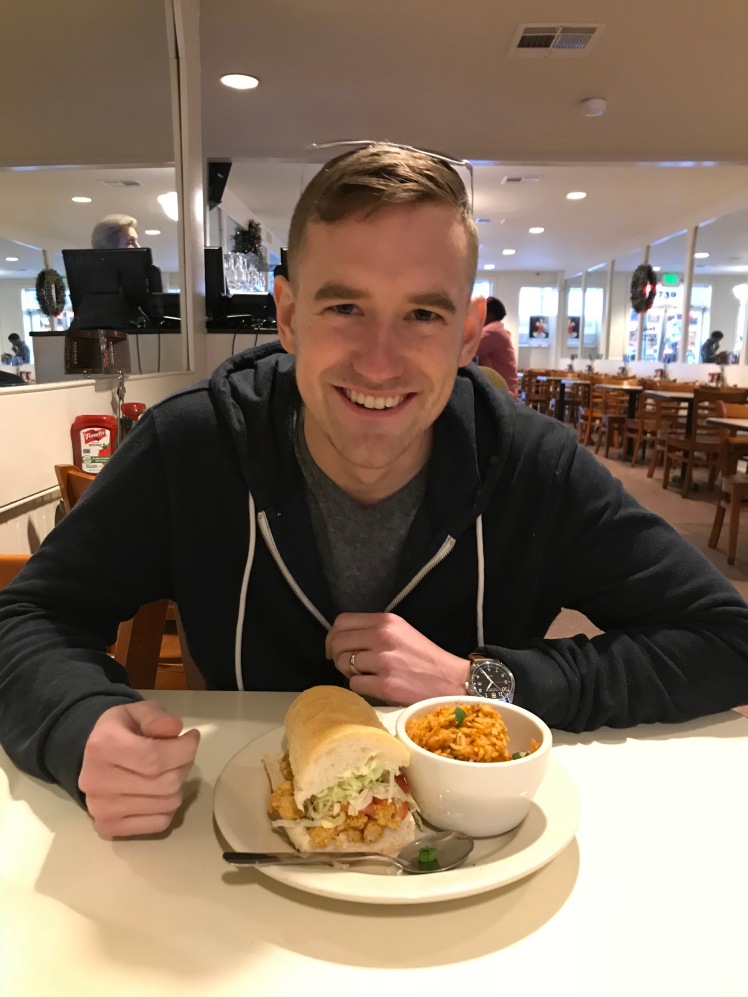 New Orleans is synonymous with Good Food. There might be nowhere else on earth where people are more serious about or have more fun eating Food. According to our New Orleans Secrets Foodie tour guide, Mark, New Orleans has more restaurants per-capita than anywhere else in the world. Multiple cuisines originated in New Orleans including Creole and Cajun and the city claims dozens of original dishes like the po’boy (locals like a meatball or roast beef), gumbo, jambalaya, andouille sausage, beignets, muffuletta, and the list goes on. Everyone in the city – local or tourist – will tell you a different place to get The Best Po’boy In New Orleans. I’ve yet to have a bad one. With so many restaurants, you can’t visit them all, and there’s definitely a lot of pressure to find “The Best” of whatever dish. Try to just relax, pick a few recommended restaurants, and go from there. Remember to enjoy the food that’s in front of your face!

I go on at length about my Experience With New Orleans Food in the post, Cajun, Creole, and Dat Dog. For any Foodies, I recommend taking a Food Tour through New Orleans to get a scope of the culinary scene. 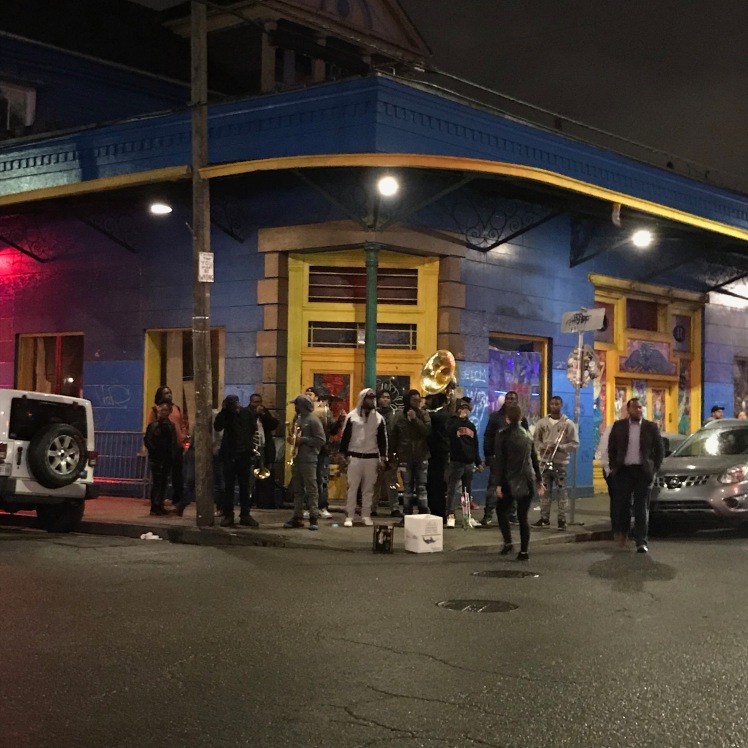 Music – jazz, specifically – is as much a part of New Orleans’ identity as food. Like the myriad restaurants available from the French Quarter to the Garden District, live music is abundant on the streets and in the bars of New Orleans. It’s difficult to find a bar in the French Quarter that doesn’t have a live music schedule – at least on the weekends. If you’re more interested in the Hurricanes than the music, walking up and down Bourbon Street and Royal is probably where you’ll be happiest. There, you can find endless sugary drinks, beer, and of course, musicians. The French Quarter has everything from classic rock to swing.

For something a little more gritty, try Frenchman Street. Frenchman is just inside the Faubourg Marigny and it’s clientele is a mixed bag. Populated with punks, white people with dreds, side-walk brass bands, locals, and tourists alike, Frenchman is known to have some of the best live music in New Orleans. Tipped off by our kayak-guide, we went to d.b.a on Frenchman and were equally surprised and delighted to find a small, welcoming, space with an incredible traditional jazz [trad] band, Tuba Skinny. The taps were packed with local beers and Millennials were swing-dancing like it was 1928. 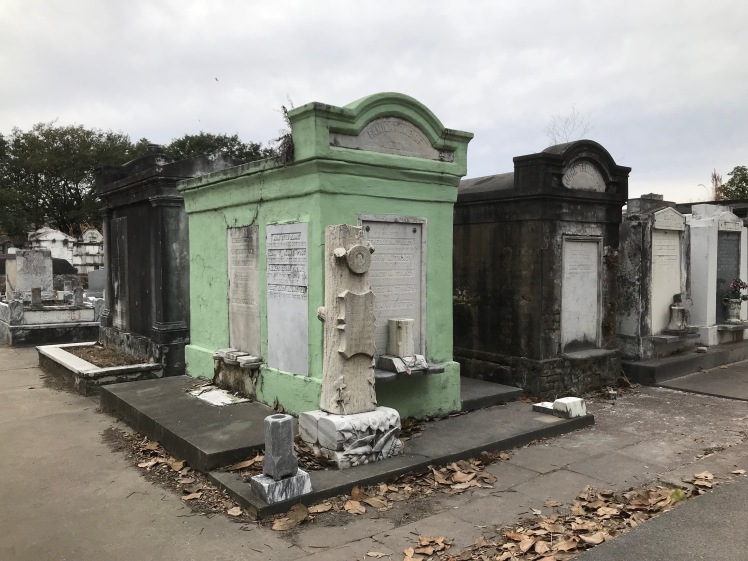 Frenchman isn’t the only street that feels a little darker, though. When you walk around New Orleans, you never know what’s going to come around the corner. Even in the French Quarter or the Garden District each street can have an entirely different mood. Maybe this unsavory undercurrent is why the supernatural flourishes in New Orleans. Anne Rice, the prolific horror & romance author of such books as Interview with a Vampire and The Mayfair Witches, lives in and grew up in the Garden District. There is at least one television show currently on air about vampires that is set in the city, The Originals and voodoo’s very real practitioner, Marie Laveau, swathed the city in mystery. Numerous other shows, movies, and books have been inspired by the ghostly, murderous, sometimes vampiric history of New Orleans. Whether you’re deeply interested in the supernatural or a skeptic, I recommend taking one of New Orleans Secrets “haunted” tours.

If you walk in the French Quarter, you’ll be bombarded with signs for ‘real voodoo’ and ghost tours. Keep in mind that, in New Orleans, there are actual practitioners of voodoo, it is a religion and it’s steeped in a torrid, racially fraught, history. As for ghost tours, while there’s less a chance of being disrespectful, the tour we went on of the French Quarter was personal, incredibly informative as well as entertaining, and didn’t make light of some of the atrocities that account for the spectral activity. For the people who were born and raised in New Orleans, this stuff is as real to them as Mardi Gras beads. 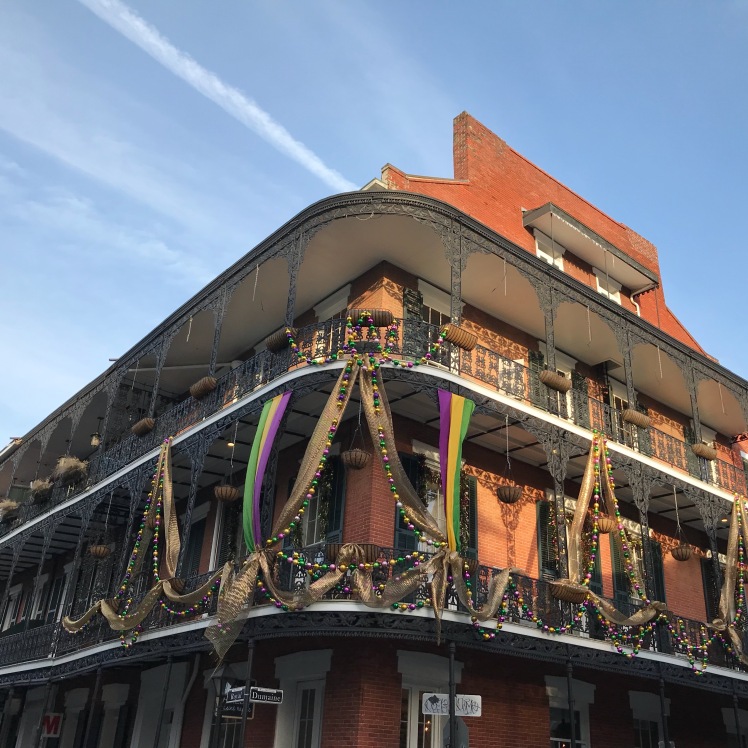 And those beads are everywhere. Hanging from the highest boughs of trees to decorating almost every porch from Bayou St. John to the Irish Channel. We visited during the week leading up to the first big Carnival parade, the Krewe du Vieux, and the city was jazzed. If you imagine Christmas decorations but instead of green and red, everything is green, gold and purple. Advertisements for King’s Cake plaster every storefront and restaurant. (The baby isn’t Jesus, by the way!) Carnival, leading up to Mardi Gras, is a whole season that starts right after Christmas. The difference in the city between the Tuesday night when we arrived and our last Friday night was palpable. Tuesday, it was calm and we walked around with our ghost-tour guide unencumbered. By Friday, the city was out in droves decked in beads, sashes, and Hurricane glasses. I can only imagine the chaos of the parade the next day. 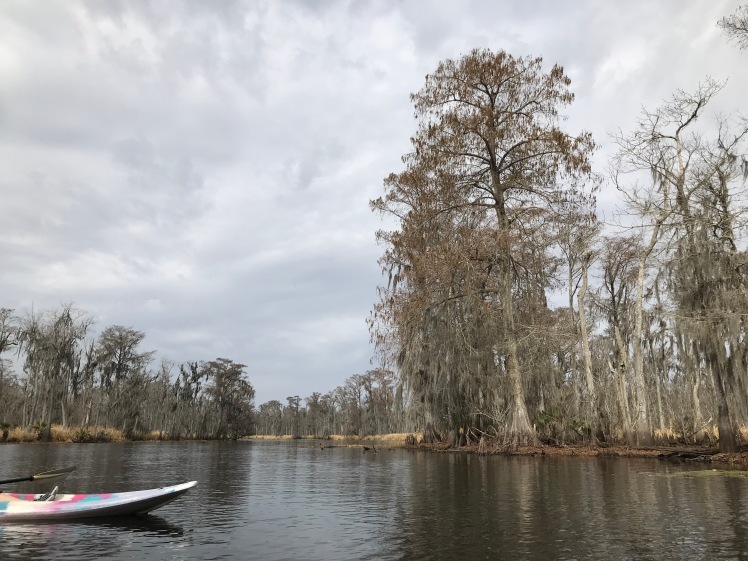 My speed is a little more “slow kayak through a swamp” than “crowded intoxicated parade of phalluses,” so that’s what we did Friday morning. With Wild Louisiana Tours we paddled through the serene Manchac swamp. As it was January and very cold for Louisiana, the alligators were all in partial-hibernation but it was still exhilarating. It felt especially nice to break up all the eating and drinking with some solid time in the wilderness.

From the bustling French Quarter to the swamps, New Orleans is a city all her own, and we barely brushed the surface. If you do visit, keep in mind that the public transportation is lackluster in speed and efficiency. You’ll walk a lot and you’ll Lyft a lot, so budget for that. New Orleans might not be for everyone: most of the city is drinking 25 cent martinis at lunch and smoking weed in the street, but if you like food, music, or the supernatural, you’ll find something to love. There are some great museums – the World War II Museum is one of the best I’ve ever visited – and those sweet cocktails can only get better as the days get hotter. Hopefully, one day you’ll visit and discover some of the flavor for yourself.

One thought on “New Orleans: City of Vice [& Virtue]”