When I learned the Cleveland Museum of Art was going to host a show in concert with Copper Hewitt Smithsonian Design Museum about the 1920s, I ordered my members’ preview tickets and drove up to Cleveland on my day off work. After excellent experiences at previous blockbuster CMA exhibitions, I assumed I would be met with a glittering portal into that sultry twenties world. I looked forward to an immersive look into the incredible artistic evolution from representational, vivid, dreamy, post-Impressionism Van Gogh to the hard, fierce, violent world of Picasso’s Cubism, Brancusi’s Futurism, man-turned-machine.

I am unhappy to report: The Jazz Age is boring.

Where the CMA succeeded with huge sweeping exhibitions about Monet and the Pharaohs, able to curate exhibits that were inspiring and surprising out of tried-and-true crowd pleasers, they failed with The Jazz Age. I hoped that at the least this powerhouse of a museum would bring together masterworks of artistic giants that shaped the course of modern art and design. Instead, I was shown twelve or so angular metallic tea and coffee sets. On social media, there was a lot of hubbub about a massive crystal chandelier hung in one of the central galleries. I can attest: it is big, it is sparkly, it is geometric. We walked through a gallery where a small geometric Piet Mondrian composition hung with similarly geometric Dutch furniture. This is a Very Good living room layout for a serious De Stijl artist. A few gritty black and white photographs of a nearly naked Josephine Baker were sprinkled throughout the galleries. We ended with the lovely display of heavily beaded Flapper dresses and a quick blurb about the newfound emancipation of women. On the wall in a corner, tucked away, I noticed the same painting of a black woman dancing, holding a cigarette that had featured in the Museum’s magazine article about the exhibition. I didn’t bother to read the wall-chat. 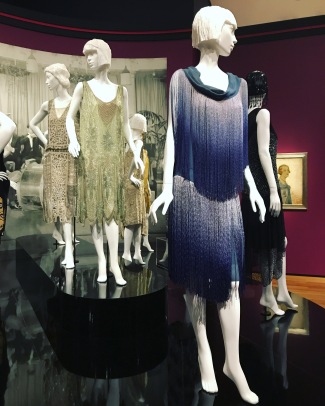 Cars and jewelry, dancing and drinking: that’s the new and fascinating information I learned about the roaring twenties, a decade made famous for its speakeasies and loose lifestyle. Stephen Litt, art critic at the Cleveland Plain Dealer, writes that the exhibition “embodies a fresh scholarly viewpoint.” If the fresh scholarly viewpoint is that Americans and Europeans alike were reeling after the most violent, grotesque war the world had ever seen and this catastrophe inspired a huge shift in arts and design, sure. Leaving the exhibition hall, I was grumpy and disappointed. I didn’t go visit my favorite pieces elsewhere in the museum; I didn’t stop in the café or the gift shop. The exhibition hadn’t presented any, as Litt calls it, fresh scholarly viewpoints. They didn’t give me my traditional masterpieces or even minor Really Famous Paintings. The exhibition doesn’t thoroughly explore the various facets of life in the post-war period, reflected in fashion and design, like Colonialism or leisure-time. Worse, it didn’t inspire me with a less-explored angle about the jazz age.

I wanted to ask the Museum: if you didn’t have anything new or compelling to say about the 1920s, why host the show at all?

It wasn’t until the next day, like a warm, dampening rain on a parade, that I realized what was missing. For a show called The Jazz Age there was very little about jazz and the people who pioneered it: Black Americans. The exhibition completely overlooks the underbelly of those licentious speakeasies, the racial and political turmoil of a country reeling after the Great War. A time when industrialists were crawling over the backs of spent workers to build the tallest skyscraper, the fastest war engine. This, a decade that was introduced with a race riot in Chicago that killed 38 people and injured over 500; a decade when the Klu Klux Klan had over 100,000 active members across the South. Little teapots that look like skyscrapers and drink mixers disguised as owls are fun, but the Cleveland Museum of Art has a responsibility to go further than fun. With a fleet of the nation’s best curators and educators, along with partnerships with nationally renowned museums, the CMA has a duty to push their visitors to think beyond the glitz and glamour. “For all the people forever,” isn’t just something you plaster on the side of your building when Donald Trump wins the presidency riding a blazing chariot of anti-immigrant sentiment. “For all the people forever,” should ring through each of your galleries with thorough, thoughtful research into those less-explored areas. Give us the glittering dresses of Flapper queens, give us the abstracted hallucinogenic Eiffel towers, but do it with intention. Otherwise, what’s the point?