Ronnie can hear the spokes on her bike whistling as she breezes past canal Zwanenburgwal. A fine mist hangs over the city, and the cold bites at her bare hands. With one hand on her handlebars, she breathes hot air onto the other. When she switches hands to warm the other, her wheels makes a gentle slalom on the wet pavement. Street lamps are fuzzy floating orbs parading down the canal, disappearing into the fog. After turning down a cramped ally that smells faintly of pee, Ronnie pulls her bike into the vestibule of the museum’s staff entrance and presses her badge onto the security panel. After stowing her bike and damp coat, Ronnie climbs the steps habitually to her desk. In an open, airy space, recently renovated, surrounded by the desks of other temporary and assistant level employees, Ronnie’s computer hums quietly.

Ronnie doesn’t make a habit of coming into work hours before the museum is open – and hours before most of Amsterdam is awake – but her nerves kept her awake. Hoping to increase her chances for the Post Doctoral Research Fellow position at the Rembrandthuis, Ronnie had slightly exaggerated her fluency in Dutch. She guessed that after living, working and breathing Dutch for a few weeks, she’d be fine. As it happens, almost everyone in Amsterdam speaks excellent English, and is perfectly obliging when it comes to helping the twenty-something Brit make her way around the city. Tonight, Ronnie is scheduled to give a tour of Rembrandthuis to its board members summarizing her research and why she deserves the grant money they’ve so generously given her. She must give the tour in Nederlands. Coming to the museum early is the only way to be sure no one except security would be in the galleries to hear Ronnie fumble through the lilting, yet guttural language.

Note cards scatter as Ronnie runs over to the older woman who is laying flat on her back on the cold cobblestone floor. Heart pounding in her head, Ronnie kneels and shouts Lijsbeth’s name, assuming she’s had some sort of heart attack. Ronnie breathes deeply, check for a pulse, she thinks. Grabbing Lijsbeth’s tiny, wrinkled wrist she holds it for a moment and then curses herself – she has no idea how to check for a pulse. As she continuously tries to rouse the elderly security guard, she slams her hand into her pocket, looking for her phone: she’s left it upstairs. Swearing aloud, Ronnie frantically looks around the room for a telephone. Lijsbeth has one on her belt. Ronnie’s fingers shake as she dials 112 and nearly shouts what she thinks is the Dutch equivalent to “heart attack” and repeats “Rembranthuis” five times. The woman on emergency line assures her, in English, that paramedics are on their way and asks if Lijsbeth is breathing.

Dropping the phone, Ronnie clasps Lijsbeth’s shoulders, looking right into her face, and barks out a strangled, “are you okay?”

It takes a moment for Lijsbeth’s eyes to focus on the room; when she lifts her hand to her head, it comes away bloody and she winces.

Lijsbeth’s already husky voice comes out hoarse; in accented English she stammers, “I think I am fine,” pausing, she carefully sits upright.

“Ronnie, you don’t have to hold on so tight,” Lijsbeth winces again and Ronnie quickly releases the woman’s hand. 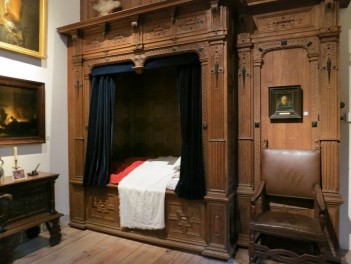 The entire episode lasts barely three minutes, but it is as if days have passed. Ronnie quickly scans the room, terrified that whoever bashed Lijsbeth over the head is still in the museum. Her thoughts of intruders are interrupted when she realizes Rembrandt’s typically cozy bedroom is in shambles. Ronnie walks dazedly to the bed; the 17th century impressive hand-carved oak box-bed is nestled into the corner and outfitted in luxurious velvet curtains. Today, the drapes are hanging at an awkward angle. Strangely, the entire false mattress – cardboard covered in bed sheets – is ripped off the bed and tossed aside, revealing the oak wood frame below.

Ronnie listens as Lijsbeth recounts the morning’s events, “I’m not sure I even saw who it was that hit me,” she sighs, “I was just walking through the house when I came in here and saw the bed. I – I must have been reaching to call the police when they-” she gestures to her head. Lijsbeth’s voice is shaky but resolved; she looks around the room and stops at the bed. Only the bed seems to have been targeted: paintings and expensive furniture all around the room remain intact and undisturbed.

“Why the bed?” Ronnie mumbles and steps over the rumpled mattress and sheets to get a closer look at the wood paneled wall at the foot of the bed. The brown leather upholstered chair, which typically sits below the small portrait hanging on this panel, is knocked on its side. The fine wood has deep gouges in it; Ronnie traces her fingers over the fresh grooves, which have left small splinters pointing out where someone repeatedly and violently slashed. Ronnie counts at least ten gouges of varying lengths, all concentrated at about torso height. She jumps when a man’s voice cries out through the house; Lijsbeth’s face goes white. Dr. Michael Huijser, the museum’s director, stumbles into the room panting.

Having never seen the director in anything short of a three-piece suit, Ronnie is startled to see him wearing grey sweatpants and a tee shirt under his grey tailored overcoat, which swings open as he squats next to Lijsbeth. In Dutch, they rapidly converse about the events before Dr. Huijser stands and turns to Ronnie. Before he can say anything, the paramedics are arriving and he rushes to let them in.

Dr. Huijser ushers the paramedics to Lijsbeth. Then, a woman with closely cropped brown hair, dressed in a well-tailored navy blue suit with what Ronnie can only describe as a Detective’s Trenchcoat, introduces herself as Inspector Sofia Jansen. She directs a young blonde uniformed policewoman to take Ronnie and Lijsbeth’s statements. As soon as Lijsbeth is done speaking with the policewoman, the paramedics wheel her away in a chair, though she protests loudly the whole way. Ronnie is shaking when the policewoman calls her over but she listens quietly, only interrupting Ronnie to clarify directions or a time. Ronnie confirms that she neither saw nor heard any intruder and, to her knowledge, the security system seemed to be fully functioning when she arrived.

By now, a team of footie-clad investigators had begun setting up cases filled with plastic baggies and had posted yellow PLAATS DELICT tape across the entrance to the room. Ronnie stood dumbfounded, watching the proceedings with her arms folded tightly across her chest. Inspector Jansen moves toward the investigators and Dr. Huijser motions Ronnie to stand with him.

“They should be gone by the time we open at 10, but the room will obviously need to stay closed.” Dr. Huijser is speaking quietly but earnestly; Ronnie has only ever met him briefly once or twice before and is surprised when he places a hand on her shoulder and addresses her by name,

“Dr. Harrington, until we know more about what has happened here this morning it is extremely important that you tell no one.” She notices Dr. Huijser smells vaguely of mint and cigarette smoke and that his normally styled silvery black hair is without product. Dr. Huijser’s grey eyes flash toward Inspector Jansen once and he says, “go home. Go straight home. Take your time and come in as if this is a normal day. Don’t speak to anyone about what’s happened. Do you understand?”

Ronnie climbs the stairs to her apartment, dazed. She had considered checking for Lijsbeth at the hospital, but Dr. Huijser had been so adamant she go directly home, she thought better of it. Preoccupied with her thoughts, Ronnie doesn’t notice her apartment door is already unlocked as she twists her key into the hole. Out of habit, she tosses her coat and boots into a disheveled pile and collapses onto the couch without turning on the lights.

Then, she screams. An uncontrolled, unrestrained piercing shriek. Across from Ronnie, at her small white kitchen table, in the dimness of morning, sits a woman. The woman holds a gun, which is aimed directly at Ronnie.

One thought on “Rembrandt’s Bed”