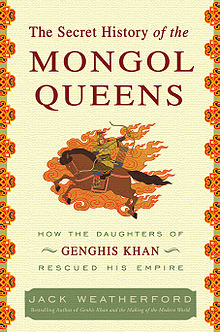 The Secret History of the Mongol Queens by Jack Weatherford is not for readers vaguely interested in imperial Mongol history; rather, it is for those seeking depth and breadth sprinkled with colorfully meaningful anecdote. Weatherford weaves Mongol lore and legend between fact and figures to illustrate the mysterious world of Mongol women. As non-fiction the book is entertaining; as a novel it’s incredibly educational.

Personally, my interest in the Mongols initially flowed from two fictional wells: the villains in Disney’s Mulan and the 2015 Netflix original series, Marco Polo. After many years pondering just who the Disney villains were supposed to be, I listened to Dan Carlin’s Hardcore History podcast: Wrath of the Khans. Here Carlin details the horror and history behind Genghis Khan’s Mongol Empire. The series piqued my curiosity of an empire vaster than Alexander the Great’s and arguably more influential than any in history. Weatherford’s book caught my attention specifically because Joan Chen, who stars as Empress Chabi in Marco Polo, stated that she used the book as inspiration for her character.

Frighteningly little is attributed to women throughout history, regardless of the lasting and dramatic impact so many have on their societies. The Secret History of the Mongol Queens confronts the issue immediately, addressing the problem that the part of The Secret History of the Mongols – the preeminent primary text on the Mongol Empire – containing passages detailing the achievements of certain Mongol women has literally been erased. Possibly censored, purposefully cut, a large chunk of The Secret History is simply missing. As author and storyteller, Weatherford pulls existing information into the larger image to make the face of historical Mongolian women, and their impact on the world, more clear.

I recommend The Secret History of the Mongol Queens with the caveat that the reader must be thoroughly interested in history and dedicated for a long read. Though the book is relatively short, it took me about 2 months to finish simply because it is so dense.

3 thoughts on “Book Review: The Secret History of the Mongol Queens”