The Real McCoy || Part I

Upbeat but sultry saxophone floated through the wide hall. As Hazel and Dot walked toward the throng of people now trickling into a great ballroom at the end of the hall, their images were reflected in dark lead-paned windows. Both girls had new dresses for the occasion, resembling a sage green and peachy-pink apparition in the glass. Hazel watched Dot from the corner of her eye, trying to mimic her sister’s relaxed posture. Dot’s ample figure was shrouded in a cylinder of flowing featherweight fabric that hit in panels an inch below the knee. Hazel smiled remembering Dot quietly explaining the virtues of a shorter skirt to their mother, to no avail. The dress twinkled merrily as she moved due to dozens of paisleys in green and white glass beads covering the top half of the dress.

Dot pulled Hazel toward the back of the great room, “I see Edee and Flo! Come on!” Their parents had been immediately drawn into conversation with a loud woman in an old-fashioned hat and her deaf husband. Hazel could hear her mother shouting to the man, “It’s so good to see you Albert, what a lovely night for a party!” After taking a long swig of his champagne the old man responded jovially, “quite right Elizabeth, the bubbly is a bit hearty!” Hazel heard her father choke down a laugh with his own beverage before before composing himself. At least one hundred glittering people buzzed through the room and out into the moonlit garden beyond. Hazel’s stomach did a nervous jig and she attempted to smile demurely – and maturely – at the other guests, some of whom Hazel guessed were from the Frenchman’s artistic circle. They were dressed either scantily, colorfully, or both. 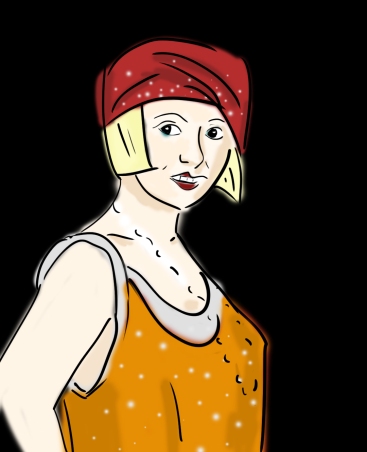 The room’s high walls were covered with beautiful tapestries in-between narrow floor to ceiling windows that were open to allow a summer breeze to roll through the smokey room.  At the back of the room a wall of french doors opened onto a terraced patio. The band, which was between songs, was stationed at the other end of the room on a raised platform. Dot’s older friend Edith – or Edee as she now preferred to be called – motioned for one of the servers with a tray of champagne flutes. Hazel’s stomach dropped. She knew she couldn’t avoid it forever – being at this adult party – but flouting the prohibition law in public seemed like a terrible idea. Edith wasn’t actually any older than Dot but she was always the first. She was first to bob her hair, first to wear bright lipstick, first to adopt a nickname, first to drink. She intimidated Hazel. Wanting to prove her mettle, Hazel accepted the illegal libation. Edee lifted her glass, her short blonde hair swaying gently against her jaw as she addressed the small group, “to the coolest cats in town!” Hazel sputtered on the dry alcohol – she had been expecting something sweet. Edee raised a dark brow, red lips open to comment, but was interrupted by the band’s trumpets sounding off a series of quick calls.

Amidst a chorus of curious murmuring, Florence offered bemusedly, “his royal majesty the King of the Party must be arriving.” Flo, Dot, Hazel and Edee exchanged wondering looks when no one appeared. A dark man with a turban-like hat called out from across the room, “Come on Frenchie, we’re waiting on you!” Before he could finish his sentence, however, a curtained doorway on the other side of the room fluttered open as at least a dozen women danced into view. The ballroom came alive with the sound of small guitars, flutes and tinkling bells. Hazel was mesmerized. Each of the women twirled and spun – in bare feet! Hazel thought they looked very much like what a medieval gypsy might look like in flowing skirts, off the shoulder peasant blouses and laced bodices. From the scattered gasps, oohs and aahs, it was obvious the crowd was at once shocked and delighted.

Hazel had seen enough portraits from the Renaissance to know that these particular costumes were lacking significant layers. As the women danced around the room in a colorful parade of diaphanous deep purples and blues, Hazel noted the sweet jingling of bells coming from their belts and ankles. When the women danced through her and Dot’s group she felt her face grow hot. It was difficult not to look at the dancers’ extremely exposed chests. It wasn’t until the music shifted dramatically to a lonesome chorus of chanting that the crowd’s attention was drawn away from the dancers. At the door three very tall, well built, men had entered. They were wearing dazzling black tuxedos and each donned a long black cape. Hazel was somewhat disturbed by their appearance: their faces were concealed with pearly white masks, each with a long beak-like nose and two pitch black eye-holes. She recognized the imagery; these were the masks plague doctors wore during the Black Death. As they passed, Hazel realized one of the men was carrying an axe, another a wheel. The third man held a cross in front of him. An unsettling and ominous sight after the merriment of the dancing, a strange silence fell over the crowd.

Everyone watched with bated breath as the men walked solemnly to the middle of the room, chanting. A platform carried by four servants – wearing the same masks – followed them; Hazel couldn’t make out what they carried because it was shrouded in black velvet. A moment passed. Hazel looked to Dot for reassurance that their parents weren’t cult-members, but her sister looked just as queasy as Hazel felt. Hazel nearly sloshed her drink down her front when, suddenly, the guests around her erupted in a cheer. A man, obviously accustomed to adoring fans, had just appeared in the doorway. Dot sighed and with the sound of immense relief said, “That’s him. That’s the Frenchman.” Florence let out a shrill laugh of relief and downed her entire glass of champagne in a single gulp. They must be mistaken, thought Hazel. The man who stood in front of her now looked for all the world like a somewhat-darker Henry the Eighth.

Breeches of crimson and gold came just to the man’s stocking-clad knees. His cap was a bulky beret, which rested jauntily on his dark curly hair. One streak of silver framed his face. The Frenchman wore a short velvet cape, and more jewelry than Hazel had ever seen on a man. Dark skin, a straight nose that graced the top of full lips, Hazel could see extraordinarily lovely teeth when he threw mischievous smiles to his guests. When he reached the center of the room – where the mysterious platform had stopped its journey – everyone knew to lift their glasses. Lifting his in return, he spoke in a much airier voice than Hazel anticipated. His accent certainly helped add drama to the whole affair when he said, “Bienvenue and welcome, friends…or should I say fiends!” Appreciative laughter filled the room. He continued in a soft manner that managed to permeate the entire hall, “tonight we gather to celebrate my latest acquisition; I’ve been searching for her for a long time. Some call my interest in history an obsession. I prefer passion.” Here he paused and eyed his audience, as if challenging someone to disagree, but there were only scattered shouts of, “here here!” 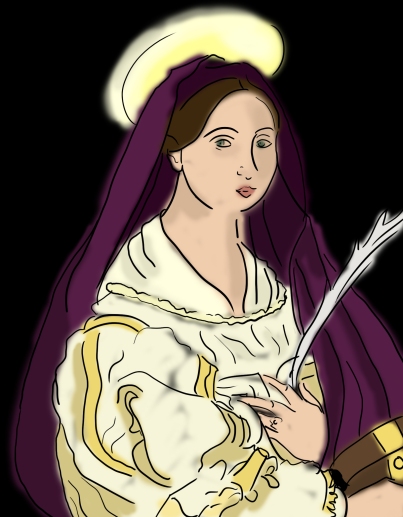 A smile played about his lips as he continued, “now, I introduce my new love, my paramour, the most beautiful lady in the world, St. Catherine of Alexandria,” with a practiced flourish the black velvet was swished away. The Frenchman stood back so the crowd could see: on top of the platform stood an easel with a painting of a striking, haloed woman. Nearly in her ear, Hazel heard a gasp. Startled, she turned to see the Greta Kingsley standing directly behind her. Up-close Hazel saw Greta’s eyes were dark grey, surrounded by fashionable kohl. They flashed at Hazel as if only just realizing she was nearly on-top of the girl. The Frenchman had raised his voice only slightly to be heard over the excited crowd, “It is Raphael’s original. Once thought lost forever, she is now found. Please, enjoy!” With this last statement the Frenchman took a deep bow and the crowd erupted into cheers once again.

To be continued on another Fiction Friday!